Anyone on a restricted diet, either by choice or necessity as I am since my angioplasty in 2012, has to learn meal planning skills. So much food you buy prepared, either at a supermarket or a restaurant, is simply not acceptable because of its high levels of fat, salt and sugar, so eating on the spur of the moment is out.

Meal planning has always been part of my routine. I normally scan supermarket ads on Wednesdays, decide what I will buy that’s on sale, and then create meals around what’s available to minimize my food costs. So I feel my planning skills are pretty good. But a recent post I received from MyFitnessPal gave me some new worthwhile tips as well.

If you’re not normally a planner, or even if you are, there are tips here that can help you do a better job of planning meals and buying what you need to minimize waste by using ingredients for more than one meal. The illustration here is a good start, clcik through to the article for more details.

Have you heard the term food hack? It was a new one for me when I saw a recent piece headlined 28 Brilliant Food Hacks. So I did some research.

Apparently the term has been around for about a year and basically means doing creative things with your cooking. Fair enough, the article I mentioned above has some things I’d never do, but some that sound tasty and fun.

I’ve written about low-salt tortillas I found at Whole Foods. One of the hacks shows how to turn these into hard taco shells using only some cups and a microwave. I plan to try this next time I make my low-fat, low-salt tacos. END_OF_DOCUMENT_TOKEN_TO_BE_REPLACED

I regularly receive e-mailed recipes from Blue Apron, a home delivery food site, and find an interesting mix of ideas. I wrote recently about matzoh-crusted chicken, which sounded like a good low-salt alternative to traditional breading for chicken.

Another Blue Apron recipe that caught my eye was one for lentil-crusted salmon. Honestly, I may not try to make this one because it’s an Indian dish and the spiciness of much Indian cuisine I’ve tried is too much for my stomach. But I’m posting it for those of you who enjoy Indian food and want to try making it at home. END_OF_DOCUMENT_TOKEN_TO_BE_REPLACED

Most recipes include salt, so I often modify them to remove it. But I was happily surprised to come across a recipe for chicken that uses salt-free matzoh as a coating instead of high-salt breadcrumbs. Salt is in the recipe, but I would simply leave it out. The recipe comes from Blue Apron, which is a food home-delivery service.

Click through to this Blue Apron recipe page to see not only how to make this, but great photos showing you a step-by-step guide. I’ve written about matzoh pizza I made, and served guests. It’s a great low-salt alternative to traditional pizza. Getting back to the new chicken recipe, however.

The orange, fennel, onions and beets go into a side salad for the chicken. There’s mention of a pickling liquid that does include salt, I’d try to leave it out and see how it tastes. I eat fennel regularly, it doesn’t need salt to bring out its natural flavor.

I plan to try this and report back on how it goes. Another note, there is sugar in this, if you’re watching your sugar, consider reducing or eliminating it.

McDoanld’s is a difficult place to get anything low-salt, low-fat or low-sugar. These days all I eat there are salads and yogurt parfaits. The parfaits have come in for criticism for being high in sugar. The salads have a lot of salt, and an impossible amount if you add any of the dressing supplied, so I usually bring my own vinegar and oil packets instead.

I’m not the only one eating there less, Millennials who grew up with Ronald are turning away in droves. The Big Mac seems to be getting the message and is moving as fast as a major company can to change some things. I applaud the changes and say do more, more quickly, now.

A major recent change was announced for its chicken. “The biggest change is the removal of sodium phosphates, which it said was used to keep the chicken moist, in favor of vegetable starch. The new recipe also does not use maltodextrin, which McDonald’s said is generally used as a sugar to increase browning or as a carrier for seasoning,” reported Fox News, and other outlets, recently.

Anything to cut sodium is great for me. A McChicken sandwich at the moment has 650 mgs of sodium, about half what I can eat a day, which is why I never buy one.

McDonald’s new Artisan chicken also will be cooked in an olive oil blend instead of margarine, according to another report. That can only help as well.

“McDonald’s new grilled chicken sandwich recipe has been introduced in response to consumer demands for simple ingredients, the company said. By removing artificial ingredients consumers are not familiar with, the company is making an effort to simplify their recipes and respond to increasing demands for natural foods,” reported Olive Oil Times.

Keep it up McDonald’s keep it up.

I love seafood, having grown up surrounded by it in New York. I particularly love oysters, clams and other shell-fish (mussels) which thankfully I can still eat on my post-angioplasty diet. Chicago’s Pearl Tavern is a must-go place for anyone who loves the types of seafood I just described.

The setting might be upscale bar, the space used to be long-time Chicago Irish bar Coogan’s and relatively little has changed, layout-wise (we were seated in the main bar room unfortunately, not one of the quieter side rooms), but the oysters, etc. are East (and West, they have both) Coast delicious. A full meal for my wife and I recently set her back (she treated) over $150, including wine. So be prepared to pay for the great tastes.

I started with a dozen oysters, six East and six West Coast. A small chalk board on the table lists the varieties available each night. Each was fabulous, smooth and just dreamy, the way an oyster should taste. END_OF_DOCUMENT_TOKEN_TO_BE_REPLACED

I apparently missed salt awareness week, catching up with this post.

We all know that too much salt isn’t good for us for many reasons. Here’s a quick chart of suitable substitutes to help you chuck the habit, without losing the taste! 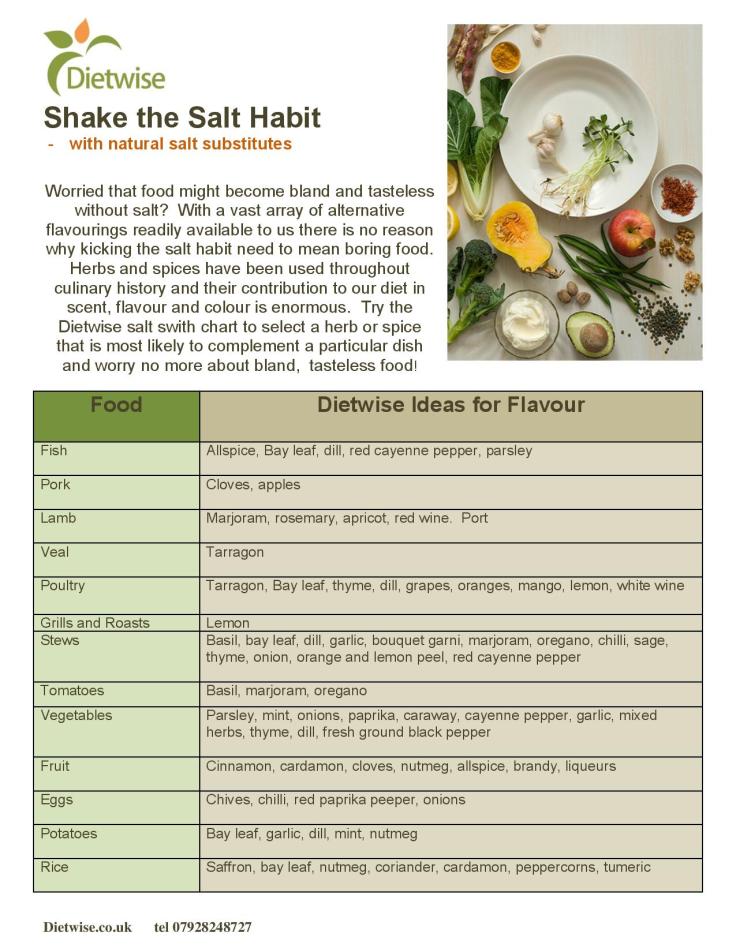 Whole wheat pasta is supposedly better for me on my restricted diet than regular pasta.

Something to do with complex carbs and simple carbs. I don’t know if I buy it all, but to be safe, I have been eating almost exclusively whole wheat pasta in recent years.

I wrote earlier this week about a weekend my wife and I had in Milwaukee recently. One of our stops was a wonderful, long-time institution in Milwaukee’s Italian-American community, Glorioso’s Italian Market. The market has moved to larger quarters than it was in during my long-ago college days there, but it’s still a very special place to find wonderful Italian specialties, like a world of different pastas. You can buy freshly made pasta there as well as a variety of packaged options.

We bought a whole wheat pasta that was made there and a packaged brand I hadn’t seen before, Garafolo, which comes from Naples, the area my ancestors also came from. Comparing the salt content in the two provided a good illustration of the importance of always reading nutrition labels. END_OF_DOCUMENT_TOKEN_TO_BE_REPLACED

My wife and I recently spent a weekend in Milwaukee, the city I went to college in which causes me to go off my diet when I’m there because of legendary frozen custard places like Leon’s on the city’s South Side. We actually started our Sunday with a trip to Leon’s but then we needed some food before our two-hour trip home.

So we went looking for a place I could get something that seemed relatively low-salt, low-fat and low-sugar.

Two long-time fixtures a bit south of Leon’s on the South 27 Street business corridor sit across a street from each other. Both have the old-school giant menus with everything from steak to pancakes, served 24 hours a day.

We stopped at the first we came to, the Omega, but the hostess there kept ignoring us in the crowd and seating people who came in after us, so we left and went across the street to Zebb’s. That turned out to be a great decision.

Zebb’s offers a veggie omelette, which surprisingly for the dairy state, doesn’t come with cheese in it. It does come with mushrooms, tomatoes and onions. I added a little ketchup and had a great, and filling which is unusual for me, breakfast there.

I recommend Zeb’s, forget the other place.
John

WHAT TO HAVE FOR DINNER TONIGHT