Rooftop bars and restaurants are having their moment in Chicago these days, with people willing to pay up for expensive drinks that come with views of the city skyline.

My Chicago suburb has its own entry in the rooftop derby, albeit not one that looks at the skyline of Chicago. Five and Dime is mostly outdoor dining above two other restaurant below it. My brother-in-law wanted to go there for his recent birthday dinner.

Looking at the menu on-line, something I do whenever I go out to eat so I can search ahead for any low-salt, low-fat, low-sugar offerings, the only thing I saw that might possibly be ok for me was a salmon grilled with charred lemon, farro & quinoa, tomato, basil, olive oil for $23.75.

Grilled salmon tends to be my go-to at most upscale restaurants and I usually ask for it without whatever sauce or butter mixture they try to put on it.

But it gets tiring to have salmon every time I eat out, so I decided to try something else, a poke bowl with Ahi tuna sashimi over steamed rice, sesame seaweed salad, vegetables, spicy Kewpie aioli, tobiko & a big tempura shrimp for $16.75.

Poke bowls are another culinary hotspot these days, but I’ve read they can be unhealthy, primarily because many are loaded with white rice which I’ve been told by nutritionists not to eat. Sushi rice, often used in poke bowls, also contains more sugar, another reason to avoid it.

But the thought of some fresh ahi tuna applied to me, so I tried the Poke at Five and Dime. I was pleasantly surprised, first because there was not a massive amount of rice in it.

The tuna was fresh and tasty, I had the aioli brought on the side and didn’t eat it after tasting how spicy, and likely salty, it was. The seaweed was tasty, although I worry if there was salt on it. The pieces of cucumber were fresh and unadorned which was fine with me.

Did it fill me up? No, not really, but it was good. The birthday boy, meanwhile, got a big slab of ribs while my wife went with barbecued brisket. Neither healthy but they smelled and looked so good.

I’ve been blogging this week about easy summer grilling meals that also are low in salt, fat and sugar. Today’s pick is chicken breast topped with a low-salt, low-sugar barbecue sauce like the LocalFolks variety I buy. 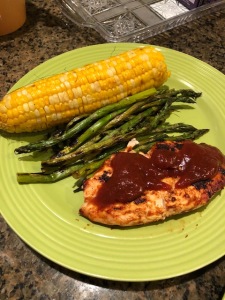 Chicken breast is easy to overcook, especially if you worry about killing any harmful germs or bacteria it might carry. But overcooked chicken can be dry and rubbery. I finally found a guide that says cook a breast three minutes per side and use a meat thermometer to be sure it’s properly done inside. END_OF_DOCUMENT_TOKEN_TO_BE_REPLACED 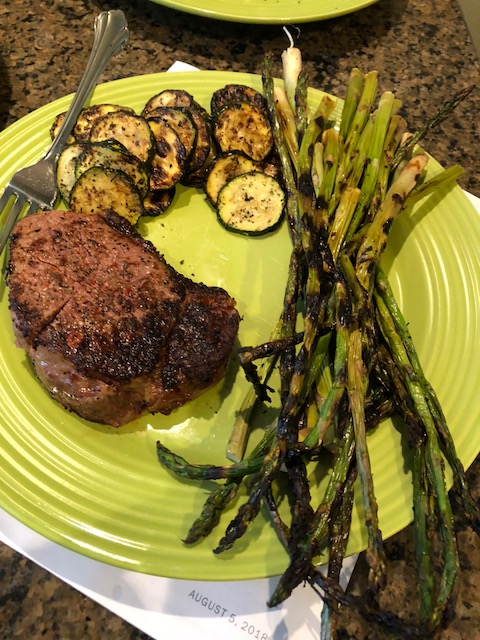 Red meat is something I eat very sparingly since my two stents done in 2012 and 2017. When I do have it, I opt for the leanest possible meat.

When thinking about having a steak, I opt for a filet mignon, waiting for them to go on sale at local stores and then stocking up for the summer. I normally eat only four- or five-ounce sizes. 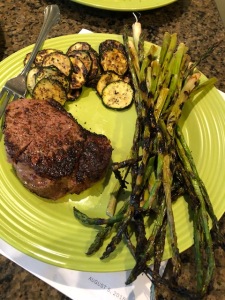 Grilling these is fairly simply, a guide I found online says 10-12 minutes for medium-rare, turning once. I like mine extremely rare, so usually go four minutes per side before checking it. That’s on a gas grill with burners at medium heat. I season with a salt-free pepper mixture we buy at our local spice store.

At the same time I’m doing the steak, I’ll put on trays of asparagus and cut-up zucchini, each with olive-oil sprayed on and an Italian spice mixture liberally applied. Cooking time depends on how thinly you sliced your zucchini, I usually check at 3 minutes and turn them if they’ve begun to brown. Same for the asparagus which tend to take a minute or too longer. Check the links  here for more specifics about cooking time for each. 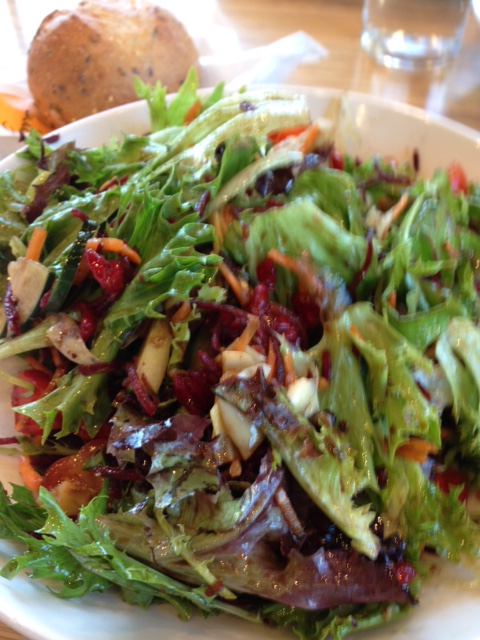 After my first stent was put in back in 2012, the hospital nutritionist I consulted with basically told me the only thing I could eat for lunch was lettuce.

So lunch salads have pretty much become my daily routine. But not this summer. Lettuce recalls have been popping up at both places to eat out like McDonald’s and food retailers like Trader Joe’s and Kroger.  END_OF_DOCUMENT_TOKEN_TO_BE_REPLACED