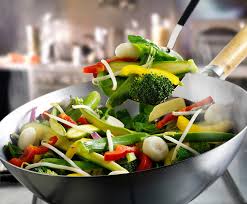 Stir fry is one oif my favourite dishes. I love that it is quick to prepare, fresh, tasty and by slightly adjusting and experimenting with different ingredients, a whole new dish is created! Stir fry’s can be high in salt especially if you use oriental sauces like barbecue sauce, fish sauce, soy sauce, hoisin sauce or oyster sauce to flavour the dish. Today, I took my stir fry to my ‘lab’ and created a low sodium, but tasty, full on flavour stir fry! Here is my recipe:

2-3 cups vegetables of your choice

2-3 chillies, depending on the flavour intensity you want

Salt is still my enemy, how about you?

If you were following the health news this week, you may have heard advice contrary to what we have always been told –too little salt is also no good and there’s no reason to toss your salt shaker. That might work for those who do not have heart disease, high blood pressure or kidney disease. For people with high blood pressure who are at risk for kidney disease or people who already have kidney or heart disease, large population studies such as this one do NOT point to safe advice.

Mariano’s is a relatively new chain of supermarkets in the Chicago area that’s been getting a lot of positive buzz for its large selection of fresh produce and it’s many prepared food areas within every store. Each store also has a wonderful make-your-own salad bar.

My new job is not far from a Mariano’s near Chicago’s lakefront, so I venture over there at least once a week for a salad bar lunch. Many of the pre-made salads and other items on the bar have too much salt for me, however, as does all the prepared foods on a large prepared food buffet (items like chicken, fish, mashed potatoes). I’ve asked store help and they tell me everything is slated before cooking, everything.

It really makes me sad to even look at the food buffet there, not to mention other food stations, such as an in-store pizza area, that I cannot buy anything at that would conform to my diet needs.

Shame on you Mariano’s for not thinking about low-salt, low-fat, low-sugar options.

Each Mariano’s also has a sushi bar and pre-packaged sushi for takeout. I formally had sushi at least once a week but now avoid it because of the salt in soy sauce that I would normally use to accompany it. Plus, I’ve been advised to avoid white rice, which many sushi selections are made with. END_OF_DOCUMENT_TOKEN_TO_BE_REPLACED

When I started this blog 16 months ago, I was at one of the lowest points ever in my life. I had just survived a near brush with death, having had angioplasty done that prevented what could have been a fatal heart attack. And if the shock of that near-death encounter was not enough to jar me, I also was told that the only way to help prevent another clogged artery and heart attack was to completely change my way of eating.

All the foods I loved, and had come to depend on in tough times, would no longer be allowed. I now joke that basically nutritionists were telling me that the only way to go on living was to slowly starve myself instead. So that’s basically what I’ve been doing.

But like most journalists, rather than suffer that in silence, I decided to use it in my writing and, in the process, to hopefully help others going through the same trauma. I started this blog two months after my surgery, hoping I could help others find new foods, new recipes and even new ways to continue enjoying restaurant food on occasion. END_OF_DOCUMENT_TOKEN_TO_BE_REPLACED

Snacking on a low-salt, low-fat, low-sugar diet pretty much means eating a piece of fruit now and then and otherwise going hungry. Chips, pretzels, candy and other more common snacks all are off-limits these days for me, and for you if you need to eat low-fat, low-salt, low-sugar. I have found some low-fat, relatively low-salt crackers and a few fat-free cookies, but they have other issues that keep them from being everyday snack items.

So I’m always looking for new snack alternatives. I recently tried some that marketed themselves as organic and fruit, but they sadly disappointed me. The lesson to remember is that a lot of foods these days are marketing themselves as healthy but in reality they’re far from it. I’ve written about that before and am sure I will be again.

The snack I’m writing about here calls itself Florida’s natural organic fruit nuggets. They’re basically gummy type chewy things filled with sugar and little else of redeeming nutritional value. Calorie count is kept low by doling them out in tiny packets. I would normally eat two or three and still not feel any snacking hunger quenched. You can see the nutrition readout here, 11 grams of sugar per pouch. END_OF_DOCUMENT_TOKEN_TO_BE_REPLACED

WHAT TO HAVE FOR DINNER TONIGHT