Thanksgiving menus at our house always include a giant salad bowl. But most of the items I once added to salads such as olives, croutons, capers and cheese, are high in sodium. Cheese is also high in fat, so it’s a double no-no. 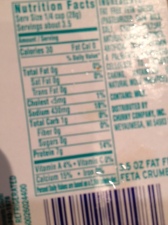 Recently, however, I’ve found some low-fat and no-fat cheeses. One I enjoy is Athenos fat free feta crumbled for easy use on a salad. END_OF_DOCUMENT_TOKEN_TO_BE_REPLACED

The traditional Thanksgiving menu wouldn’t be the traditional menu without some sort of stuffing for the turkey. But pre-made stuffing mixes are loaded with sodium because they’re generally bread-based and most bread is high in sodium.

I bought some Stove Top stuffing that is labeled as low-sodium, but that’s a relative term. Half a cup of it contains 250 mgs of sodium. That’s only four ounces, I can’t imagine not wanting to eat more than that on Thanksgiving.

END_OF_DOCUMENT_TOKEN_TO_BE_REPLACED

Thanksgiving menus can be challenging when you’re on a no-salt, no-fat, no-sugar diet. I’ve been writing and will continue to write this week about low-salt options.

But I also went searching online and found a variety of sites and recipes you can try. These are no-salt focused, so some items have too much fat and/or sugar to make. You can adjust some with lower-fat ingredients, I would think.

The Low Sodium Gourmet has a stuffing recipe I may try, using no-salt bread instead of just wheat bread. It also has what sounds like a tasty way to make string beans more than plain string beans. Its cheese cake is out of the question because of fat content, however.

Thanksgiving is traditionally chestnut time. Nuts are among my least favorite things, generally, but the one exception is chestnuts. Unlike other nuts, chestnuts get soft when you cook them and they’re quite filling as well.

Chestnuts are normally only available around Thanksgiving time in the United States. Cooking and peeling them can be an effort, if you don’t peel them quickly after cooking, the shells will stick and you’ll end up throwing them away.

Chestnuts are low-fat and low-salt, but there’s sugar to worry about.

So I was excited to see chestnuts that were pre-cooked and pre-peeled at Costco recently. The box contains four packets of about a cup each of chestnuts, or 200 calories with only 2 grams of fat and 2 mgs of sodium. You have to love that. One caveat though, they also contain 44 grams of sugar. Now some nutritionists say sugar in fruits is ok, it’s just processed sugar that causes trouble for our bodies. Others say all sugar is bad, so if you’re on a low-sugar diet, beware here. END_OF_DOCUMENT_TOKEN_TO_BE_REPLACED

Thanksgiving menu planning can be tricky when you’re on a low-sodium, low-fat, and low-sugar diet. I wrote recently about searching for fresh turkey to avoid frozen and brined ones that can be loaded with salt.

But salt is in most everything on a Thanksgiving table, depending on how carefully you shop. Condiments like pickles and olives are loaded with salt, for example. Add them to a harmless salad and you have a salt bomb waiting to explode in you. END_OF_DOCUMENT_TOKEN_TO_BE_REPLACED

Thanksgiving turkey should be a no-brainer for those watching their salt, fat and sugar intake. The white meat of the turkey (sorry no fatty dark meat or skin on your plate) is lean enough to eat.

But unfortunately, turkeys can hide mountains of salt depending on which kind you buy. Like everything else in the normal grocery store, you need to check the nutrition labels before buying. Why? Because any turkey that includes liquid for self-basting likely has tons of salt in it. Even some that aren’t self-basting also are injected with juices to aid cooking and those juices are salt solutions basically.

Here’s what I found on a walk past the turkey cases at a local Jewel supermarket in the Chicago area. The first turkey I looked at, a self-baster had 230 mgs of sodium per serving. Compare that to a fresh turkey I found that has between 50 and 70 mgs per serving.

That’s a major difference particularly if you’re planning to eat more than one serving, four ounces, as most people do on Thanksgiving. END_OF_DOCUMENT_TOKEN_TO_BE_REPLACED

I feel fortunate at a restaurant that has one option with no salt, fat or sugar that I can order. So imagine how much I love a local hotspot here in the northern suburbs of Chicago, Dengeo’s.

The Dengeo’s in Skokie (there’s another in Buffalo Grove) has grown from a hot dog stand to a quick serve restaurant—order at the cash registers and wait for your food to be done at the pickup counter.

My favorites at Dengeo’s used to be the gyros and the hamburgers and hot dogs. Those are all off my diet these days, but thankfully Dengeo’s comes through for me with a chicken breast dinner plate that features two meaty breasts in a lemon/olive oil dressing. Rather than get the French fries, I ask for a salad as a side and get a large bowl of salad, not some little skimpy offering.

Yard House is a chain restaurant that began life in southern California and now is in 17 states across the country, ranging from New York to Hawaii, according to its website.

Chain restaurants usually are not the place to get no salt, no fat, no sugar dishes. So I was a bit apprehensive when my wife told me we were meeting friend of hers at a local outlet of Yard House, which features tavern-like foods.

Much as I once loved a great burger, I can’t eat them anymore and watching other people eat them is painful for me.

But thankfully, there was an option for me on the extensive menu, a tuna dish served with brown rice. The dish normally involves a black bean sauce which is extremely high in sodium (the Yard House nutrition info lists it at 1708 mgs for the entire dish) but when I told the waiter I was on a no-salt diet, he suggested the sauce could be kept on the side. I dipped a fork into it for a tiny taste, it was wonderful but too salty for me these days, so I was very happy he had been so understanding and helpful.

Trans fats, which many say contribute to heart disease, are being banned from American processed and restaurant food, finally. But food makers and restaurants saw the writing on the trans fat walls long ago and have been phasing it out of most products.

That hasn’t stopped stories listing all the foods you may have trouble finding once the ban goes into effect (something still a way off).

Margarine will probably feel the biggest impact, ironic since I’m old enough to remember when healthcare professionals were telling us that margarine was healthier than butter. END_OF_DOCUMENT_TOKEN_TO_BE_REPLACED