Thanksgiving is traditionally chestnut time. Nuts are among my least favorite things, generally, but the one exception is chestnuts. Unlike other nuts, chestnuts get soft when you cook them and they’re quite filling as well.

Chestnuts are normally only available around Thanksgiving time in the United States. Cooking and peeling them can be an effort, if you don’t peel them quickly after cooking, the shells will stick and you’ll end up throwing them away. 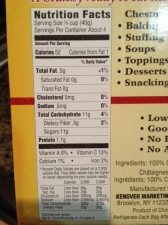 Chestnuts are low-fat and low-salt, but there’s sugar to worry about.

So I was excited to see chestnuts that were pre-cooked and pre-peeled at Costco recently. The box contains four packets of about a cup each of chestnuts, or 200 calories with only 2 grams of fat and 2 mgs of sodium. You have to love that. One caveat though, they also contain 44 grams of sugar. Now some nutritionists say sugar in fruits is ok, it’s just processed sugar that causes trouble for our bodies. Others say all sugar is bad, so if you’re on a low-sugar diet, beware here.

If not though, I found these, which cost about $1.25 for each bag in the package, a fun snack and also something you can use in stuffing for your Thanksgiving turkey. I ate the ones I bought before Thanksgiving and Costco didn’t have any in stock the week before the holiday, which was a pity, I would have bought more.

They are also available on Amazon, but for considerably more money, so look for them locally.
John

2 thoughts on “Thanksgiving menu: how about some chestnuts”