Shrimp is always a nice change-of-pace to build a meal around. I’m always looking for new recipes that include shrimp, such as one with fennel and cucumbers I wrote about. So I was attracted to this recipe I found on CookingLight.com for steamed shrimp and watermelon salad.

It sounds pretty basic to make, if you don’t want to devein shrimp, buy them already cooked, I find that a handy time saver. Doing that eliminates the first step of this recipe, which is cooking the shrimp. END_OF_DOCUMENT_TOKEN_TO_BE_REPLACED

I was made a lemon-infused tilapia that tasted so lemony, my wife could not eat it. What can I say, I love lemons.

My grandparents all came from a section of Italy that runs from Naples south to Salerno. It’s a region where they grow lemons as big as your head — and they make limoncello, an alcoholic beverage that has become the region’s major export.

So anytime I see a recipe with lemons, I’m interested. That’s why Grilled Lemonade Chicken from the Food Network got my attention.

With a few changes, this can be a heart-healthy recipe as well:

The recipes uses chicken thighs. Those are the fattest part of a chicken. They taste good plain, so it’s no great cooking challenge to make them taste good. Substitute chicken breasts.

The instructions talk about skin, that’s also a fat-carrier. I normally cook all chicken skinless.

The recipe also says use Minute Maid lemonade. That’s high sugar, I only buy MinuteMaid’s reduced-sugar varieties. Availability seems to vary by market, so check where you normally shop. END_OF_DOCUMENT_TOKEN_TO_BE_REPLACED

Early this year my wife and I took a long-talked-about dream vacation to Hawaii, spending a week in Honolulu and another week on the island of Kauai. It seems a million years ago now with a pandemic sweeping the globe.

But I hope that reading about wonderful places to eat in Hawaii will brighten some people’s days and turn their thoughts to happier times.

I’ve already written that there’s a lot of junk food in Hawaii, especially in the heavy tourist areas like Honolulu. But there also are some wonderful restaurants featuring fresh seafood.

One we enjoyed was the Hula Grill Waikiki. It’s in a hotel, but much better than the average hotel restaurant. It offers a wide range of seafood option, including nightly specials, and fish you don’t see on the mainland like opah and monchong.

And both mahi mahi and ahi are on the menu, fresher there than you’ll taste on the mainland as well. Pictured here is my dinner, which as I recall was a nightly special, I think of ahi.

My wife recently put together a winter vacation for us that had been a dream of mine for about 40 years — going to Hawaii. I’d been there, alone, in the early 1980s and loved it, vowing at the time to go back someday with someone I would want to share it with.

That’s exactly what I did with my wife in January. But there’s been a major change for me since 1981, my heart issues. And that complicated our eating while there for almost two weeks.

Fast food in Hawaii is inevitably salty and fatty. SPAM on rice anyone? It’s a popular sushi option there as is breaded fish of all kinds, tacos or all kinds and poke, which is highly salted fish. So we had to work hard to find healthy alternatives.

I had expected more fresh fish and fruit, which I remembered from my last visit. We had to search that out, most often in more expensive restaurants. We found some great meals, but had to pay $100 a couple and up for them (and we don’t drink alcohol very much so that was usually without drinks).

I’ll be blogging about our meals the next few days, come read about them. Here’s a tease, a beet salad and sashimi plate I had at Duke’s at the Marriott resort on Kauai. 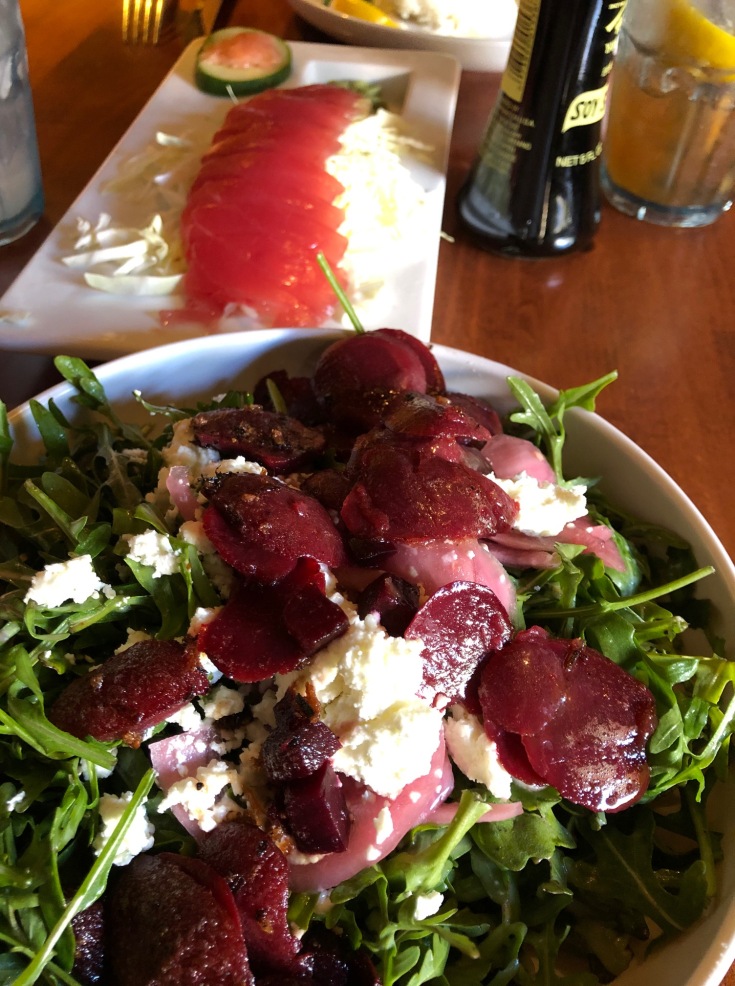 Fish is a traditional Friday dish for Catholics on Friday during Lent, the 40 days leading up to Easter. Easter Sunday itself is usually reserved for salty main courses, like ham, or fattier ones like lamb. But if you want to avoid high-salt, high-fat meals, why not try fish for an Easter Sunday main course instead?

You can use hake, cod or flounder as the main ingredient. I’d leave out the salt called for, but include everything else, except look for low-salt olive instead of regular salty ones. Ingredients are: END_OF_DOCUMENT_TOKEN_TO_BE_REPLACED

Heart-healthy approaches to eating usually emphasize eating a lot of fresh, rather than processed, foods. That means your refrigerator should be stocked with fresh produce, fresh fish and fresh chicken, depending on your tastes.

But how long can you keep those before they start to spoil, even in the refrigerator?

WebMD has a handy illustrated guide, although the first thing that struck me about it is that we shouldn’t be eating many fo the items covered here — like deli meats, Mayonnaise, butter, most high-fat ground beef and cheese. END_OF_DOCUMENT_TOKEN_TO_BE_REPLACED

Rooftop bars and restaurants are having their moment in Chicago these days, with people willing to pay up for expensive drinks that come with views of the city skyline.

My Chicago suburb has its own entry in the rooftop derby, albeit not one that looks at the skyline of Chicago. Five and Dime is mostly outdoor dining above two other restaurant below it. My brother-in-law wanted to go there for his recent birthday dinner.

Looking at the menu on-line, something I do whenever I go out to eat so I can search ahead for any low-salt, low-fat, low-sugar offerings, the only thing I saw that might possibly be ok for me was a salmon grilled with charred lemon, farro & quinoa, tomato, basil, olive oil for $23.75.

Grilled salmon tends to be my go-to at most upscale restaurants and I usually ask for it without whatever sauce or butter mixture they try to put on it.

But it gets tiring to have salmon every time I eat out, so I decided to try something else, a poke bowl with Ahi tuna sashimi over steamed rice, sesame seaweed salad, vegetables, spicy Kewpie aioli, tobiko & a big tempura shrimp for $16.75.

Poke bowls are another culinary hotspot these days, but I’ve read they can be unhealthy, primarily because many are loaded with white rice which I’ve been told by nutritionists not to eat. Sushi rice, often used in poke bowls, also contains more sugar, another reason to avoid it.

But the thought of some fresh ahi tuna applied to me, so I tried the Poke at Five and Dime. I was pleasantly surprised, first because there was not a massive amount of rice in it.

The tuna was fresh and tasty, I had the aioli brought on the side and didn’t eat it after tasting how spicy, and likely salty, it was. The seaweed was tasty, although I worry if there was salt on it. The pieces of cucumber were fresh and unadorned which was fine with me.

Did it fill me up? No, not really, but it was good. The birthday boy, meanwhile, got a big slab of ribs while my wife went with barbecued brisket. Neither healthy but they smelled and looked so good.

Maintaining a heart-healthy diet takes a lot of inner discipline given that we’re surrounded by so many food options that are high in salt, saturated fat and sugar. The task becomes even more daunting when you’re on vacation, especially in a foreign country with even more foods you love.

I’ve been vacationing in Italy, my ancestral homeland, with a large group of cousins. That means meals here have been wonderful family affairs with so many food options its difficult to count them all. But most involve salt and sugar. What to do, fear everything I eat or put diet concerns aside for the duration of the trip?

I’m trying to walk a middle ground, which has meant ordering seafood as often as possible and minimizing my pasta, pastry and gelato intake. Southern Italy is a wonderful place to eat seafoods. I had a piece of amberjack in a light tomato sauce last night, for example, something I rarely see on US menus.

I’ve also had oysters and clams, albeit with pasta. Pasta portion sizes are smaller here than in the US, which is a good thing since we tend to fill plates to overflowing at home.

Gelato, of course, is the hardest goodie to pass up, especially when everyone else keeps pushing for it. And with that, I don’t do small portions well.

I’m assuming I’ll gain weight on this trip, we’ll see how much when I’m back in the States and have a scale again. Then it will also be back to strictly watching the salt, fat and sugar,

We started our 12 days of no-salt, no-fat, no-sugar Christmas meals with a great new chicken recipe I tried recently that includes a strawberry/pineapple salsa. So let’s follow that tonight with a simple but delicious scallop dish.

Scallops can be made simply on the stove-top in hot oil. Add flavorings that you enjoy to spice them up, or have them plain as I do and enjoy the natural flavor.

I’d pair the scallop with a fun side-dish like the roasted carrots with red onions, fennel and mint that I wrote about as a possible thanksgiving side-dish option. It’s a bit more complex and so would be a nice accompaniment to the simple scallops. One simple, one complex makes a nice combination for your taste buds.

The Food and Drug Administration and the Environmental Protection Agency recently put out new guidelines regarding fish consumption that includes this handy infographic showing which fish have less mercury (that’s the interpretation of healthy, or best choices, here).

The chart is aimed especially at pregnant women and parents but we all should be aware of mercury content in the fish we eat. The FDA and others position fish as a healthier alternative to fatty meats, but mercury content is the wild card here that throws a wrench into all of that. END_OF_DOCUMENT_TOKEN_TO_BE_REPLACED