Burger King is getting a lot of media attention for its new Satisfries, which it touts as being lower in fat than the leading brand (i.e. McDonald’s) and than its own regular fries. 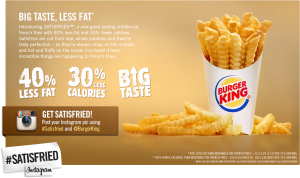 Seventeen grams is about half my now daily limit of 40 grams of fat, so I’ll likely still avoid the new fries as I do most fast food these days, with the exception of some salads. I tend to avoid all salad dressings because of sodium as well, some salads can have more sodium than fries, as I wrote yesterday.

I applaud Burger King for this effort. It’s long been known as the chain that caters to the outrageous tastes of teenage boys, so to see it do something to cut fat in a product is laudable.