A recent visit with my son and daughter-in-law in St. Paul, Mn., gave me a chance to try a host of places there that fit into the farm-to-table movement my son has become so passionate about. The movement is all about local food, local production and organic farming methods. 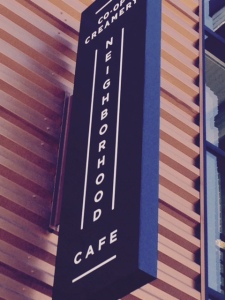 I love the concept, saving on fuel and other transportation costs while putting people back in touch with their food supply. I worry about the cost for the average and below-average income earner, but presumably as more of this happens, costs will come down.

The Co-op Creamery Neighborhood Cafe is owned by the Seward Co-Op, which also runs the supermarket in Minneapolis my son regularly shops at. And while the lunch menu was full of local foods, I remained a bit worried that most dishes might have too much salt for me, so I opted for an omelet, which has become a go-to dish for me when in new restaurants for lunch.

The Co-op omelet was really luxurious in its taste. Maybe because it as made with whole, organic eggs and not just yokes, it had a fullness of taste I don’t usually experiences in omelets. I suppose some would argue organic eggs taste better. I’ll leave that debate for another day.

I opted to get it without cheese on it, saving that fat. It came with scallions inside, a nice taste contrast with the eggs. I also ordered wild rice toast, hoping it would be healthier than regular toast. I liked the taste so much, I later bought a loaf of rice bread at the co-op (I’ll be blogging about that soon). Also available was a low-salt ketchup, a nice to have but seldom seen item in a restaurant.

All in all, it was a very pleasant lunch-time experience.